People trade stocks; and an understanding of the human thought processes is at the foundation of markets.

The recent gyration of the world’s markets reminds us how quickly greed can turn to fear and how investors can begin to make mistakes. We find that heightened emotions often lead to mistakes that can be easily avoided. This month we examine markets over the past two decades and how investors can avoid mishaps.

Curb Your Mind — Understanding Why Investors Don’t Achieve Their Goals

The action of walking a dog is rich in behavioral significance. Often times we witness a human walking their canine companion on a leash. While the two-legged walker appears to be in charge, the dog is actually dictating the direction by pulling its owner around. As human chases canine with arm extended and leash taut, it is clear the leash does not always signify control. This action serves as a metaphor for the human mind, as our minds are often dragging us around and leading us in undesired directions.

Many parallels exist in this metaphor as it relates to an individual’s wealth. While the investor may have all the tools to make the appropriate decisions regarding their finances, the dog (fear, greed, lack of knowledge, inability to act, or the granddaddy of them all – the ego) is often walking them.

In 20 years of investing, which has included two bear markets of more than 50% declines in the S&P 500, we have not witnessed an investor drastically hampering their lifestyle without succumbing to one or all of those common culprits. Vital to taming your investments is taming your mind and emotions with understanding of the facts and the self. (This is true for all levels of investors or those selecting professional advice.)

Despite two large dips, an investor in the S&P 500’s total return index would have grown assets over 350% since then. Realistically, we have never heard of a person that owned just the S&P 500 for this time period. The cocktail of the mind/ego/emotions would rarely allow such an investor to stick to one strategy thru this much trauma.

Consider this scenario: if you started investing with 100% of your money in the stock market on the worst day in modern history on 10-9-2007 (the previous stock peak), you would have lived through the worst financial crisis since the Great Depression and now be up 60%. Our point? Don’t let the dog drag you away from achieving your goals of growth of your assets.

We do not advise a passive index strategy, but use this simple example to provide education on stock market and behavior. We believe creative research and understanding of valuations and trends will lead to a portfolio with lowered risk and increased returns.

What follows are cases encountered where an investor did not achieve their goals and caused a self-induced catastrophic financial event by letting the dog walk them.

Concentration in One Asset

1999 — I was part of a team in NYC creating quantitative models to analyze the risk associated with concentrated stock positions during the dot com boom. Unfortunately, we witnessed many people not taking our advice of selling their large stock positons. They watched the stock drop to almost zero and their fortunes evaporate. They failed to realize they had already won the lottery and did not cash in the ticket. Note, this is also common with oil and real estate holdings (especially in Texas.)

2000-2002 — Many people sold out of stocks during a painful three-year decline in markets. These investors waited until 2007 to re-enter the market only to buy back in at the top and then lose another 30%-50% in financial crisis. Most of those folks are still in cash or bonds and will most likely never return.

2008 — This recent stock decline was a time characterized by irrational, panic selling and not getting back into the market. Any person who did this in ’08 has missed the 200% rise in stocks since. Many are now coming to the realization their life expectancy in 2015 is much longer than it was in 2007. In 2015, health is carefully monitored with technology and preventative medicine. Advances in medicine and biology are staggering. The healthy population is able to travel and be active for much longer than they had anticipated. This means their funds must grow for an active lifestyle well past last decade’s life expectancy statistics. 70 is the new 50.

There is a common thread and consistency in these cases of investor frailty: buying and selling at less-than-opportune times. Refer to the chart (by Wealthfront) displaying the performance of the stock market VS. money flows into equity mutual funds. 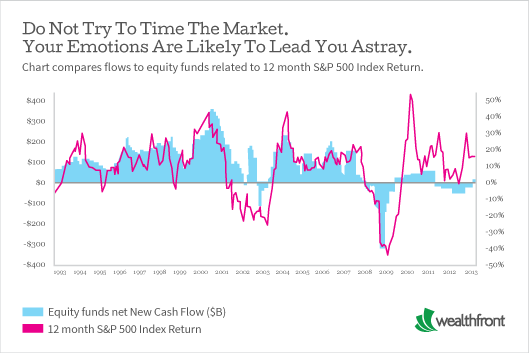 One might think that having a professional wealth advisor would help these cases. However, just because they now call your broker a “wealth advisor” does not always mean that he or she understands markets, how they relate to human emotions, or has the tools on-hand to tactically manage around inevitable bumps.

Timeless — This is akin to not exercising or eating right. Individuals get so overwhelmed with the thought of making a change and the enormity of taking the first step that they convince themselves to procrastinate. There will always be a reason to not act today. [Equally as debilitating is the lack of ability to admit you are wrong. This ego-related hindrance takes down both professional and novice investors alike.]

Not Changing Investment Strategy with the Times

This is very common. In fact, we are shocked every day to find investor’s with the investment strategy of local municipal bonds and large U.S. stocks with the intention of holding forever. The world has changed drastically since this strategy was effective. A static portfolio is no longer optimal. In order to most effectively manage risk, investors must be global, tactical and proactive in strategy.

2010 to present — This problem is common in the age of instant information as investors see short term events presented by “experts” and make rash decisions about their long term plan. This is an example of not understanding market volatility. As this is probably the most common investor issue today, let’s dig deeper:

In our world of constantly streaming information brought to you by your computer, iPad, television, phone, newspaper, etc., it’s common to experience informational overload. Too much information is not always a bad thing, but too many thoughts and distractions can be a BIG problem for investors. The human mind is the most magnificent instrument in the world. Much like a sharp knife, this tool can be used for good; but if not properly wielded, it can cause much harm.

We like to picture the human mind very similar to a stock ticker tape. The stock tickers (or thoughts in this analogy) are constantly rolling by…

…an endless stream of thoughts rolling at all times. How does one tame this constant flow?

We believe the key to slowing down the tape is to imagine just one thought on the screen at a time, and at a very slow roll. The key to pulling this off is to find space between the thoughts. When space can be found between the thoughts it is possible to have more clarity into larger themes. For example, what is the purpose of all this investing anyway?

It’s easy to get distracted and question ourselves and our strategies when challenges arise. It’s even easier to forget to pause and look around when life gets so busy. When we slow down and understand the reason behind our actions and those of others – and how they affect the world’s financial markets – we can all make sound decisions about our money.

Our goal is to not let the dog walk us, understand the facts and make the best decisions for our investors. And we strive to make the highest point of today the lowest point of tomorrow.