Much of the confusion revolves around economic factors – interest rates, currency, energy prices and growth policy.

Several economic factors are influenced by policy makers and central banks. Our goal this month is to slice through the confusion and find direction for the remaining months of 2015.

Drought in California, rain in Texas and a tsunami of global financial information got us thinking – In times of desperation, the world looks for a hero to remedy the situation – a “Rainmaker”. This month we explore the following Rainmakers:

As California’s troubles subside, Texas normalizes, the Fed attempts to raise interest rates, the ECB starts stimulus, China fumbles, and oil is gushing all over the world, we thought of Charles Hatfield and the most underrated aspect of the Rainmaking cycle – making the rain stop.

A Little California Voodoo — In the early 1900’s, San Diego was suffering a terrible drought and was desperate for relief. The city of San Diego hired Charles Hatfield to, literally, make it rain. Legend has it, Hatfield built a secret tower, mixed some chemicals together and then released his potion into the atmosphere. After much time, it began to rain. The storms were welcome at first, but then did not stop. The intense, extended storms caused massive flooding and destruction. Hatfield went from hero to villain. In the end, nature was restored despite short-term pain caused by the Rainmaking process. This story has parallels to the actions of global central banks during the financial crisis.

The Fed was called upon to help during the 2008 financial crisis. They mixed-up a potion called Quantitative Easing (QE) to flood the capital markets with liquidity and stimulate the economy. Today, the stock market is up over 150%, millions of jobs have been created, growth has returned and the financial markets appear to be running smoothly once again.

The question now is: How will they make the rain stop without causing a severe disruption? The exit is an integral part of the Rainmaker’s process. And it is usually associated with some pain.

Money for Nothing — It appears the actions by the US Fed stimulated the economy. Now, they must stop the rain and let nature take over. The carefully paced increases in rates could begin the end of one of the greatest economic feats in history, but there will be an adjustment. A shift in policy will most certainly change the short-term growth prospects of the US stock market.

Have You Seen the Rain? Enter the third Rainmaker – Mario Draghi and ECB. The ECB began their flavor of QE in 2015. The ECB Rainmaking is early in the cycle as we forecast it takes 6-9 months for stimulus to take effect. The QE, in conjunction with lower energy prices has already kick-started a Eurozone recovery.

We believe the recent slowing growth in China will not have the degree of negative impact on the European economy many are forecasting. Thus, the recent selling in EU equities has created an opportunity.

Purple Rain — Chinese Rainmaking has become cloudy and confusing, as it is a Communist regime looking to be more accepted by the global financial community as a Capitalist-friendly partner; a softer shade of red; if you will.

China clearly made it rain for the past decade with growth unprecedented in history. Today, they look to slow down the growth to a more sustainable level without turning the faucet off too fast and causing a shock to the system. China is at a pivotal point in the cycle and their ability to navigate is vital to understand as a global investor. Most US investors are not invested in China, but more concerned about the spillover effects on Europe and US.

A point of much concern has been the impact of China’s slowing on energy demand. This leads us to our final and favorite Rainmaker…

Born in the USA — The Energy industry in the good ol’ USA. Our country was faced with rising oil prices and dependence on the Middle East. Innovation and human spirit drove to the creation of fracking to solve this problem. Fracking allowed the US to extract oil at a lower price and access much more oil than before. We are now the number one oil producer in the world – overtaking Saudi Arabia – leaving OPEC less effective.

Think back to those predicting $150-200 per barrel oil prices. Many investors are down 60%-70% in energy investments in the past twelve months. We are proud our clients were not. Sometimes the best investments are ones never made.

The question now is: Do they stop the rain/oil pumping? We believe lower oil prices are here for the immediate future. However, there is an oil price where investment in oil projects will stop and supply will fall, thus raising oil prices.

The extreme pessimism in oil has created some nice entry prices for those with longer-term views. Many large US oil stocks pay nice dividends. In addition, these companies are well-positioned to buy assets on the cheap from those in distress.

We Are the World — Understanding each Rainmaker and their point in the cycle is important, but the real trick is putting the pieces together to see the effects on your portfolio. We believe there is SEVERE PESSIMISSIM reflected in many securities today as confusion has peaked. We have drafted the following to understand the Rainmaking cycle: 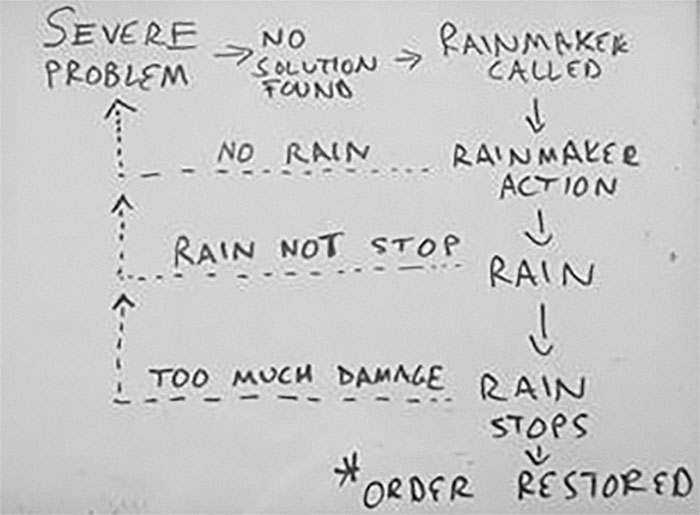 Below we explore where each Rainmaker is in the process and reach an investment conclusion:

US — (Approaching Rain Stops) The Economy is picking up steam and should grow at a modest pace for the rest of this year and into 2016. The stock market valuation is currently fair after the recent correction. It is now time in the cycle to be very selective of certain stocks and industries. We think the Rainmaking will complete the process successfully and restore order – for now.

Europe — (Rainmaker Action) The QE is helping the economy gain pace in their recovery. The valuations are less than the US and growth looks probable. The effects of a slowdown in China will be felt more in Europe than in the US, but we feel the selling is overdone. The refugee situation is a very important factor and we are watching the developments closely.

China — (Second lap back to Rainmaker Action after trying to stop.) This is the culprit for much of the confusion and stoppage in the US and EU Rainmaking cycles. We believe the slowdown will be mild in the next twelve months. There is real growth in parts of China – the service sector, for instance. Manufacturing is slowing. Do NOT be surprised when the Chinese manufacturing data is negative. The economy is shifting.

There are 600 million internet users in China and the middle class and upper middle class continues to grow. See Apple and Nike recent results in China for examples.

It remains our stance that China will not go away. It is clear the government is committed and focused on improving their economy. They are struggling through a confusing stage of the Rainmaking cycle as they attempted to stop too early.

The debt created to fuel the growth is another item we are monitoring. The debt will most likely be a problem later down the road, but today it can be navigated as China, unlike many other countries, has assets on the other side of the balance sheet.

Global Economy — Today we remain cautious in the short run, but confident in the mid-to-long run for select parts of the global economy. It has been a bad move to bet against governments committed to Rainmaking. The reality is – many of these moves are unprecedented, especially all in concert with each other. The ability to understand and use creative thinking to find an informational advantage is the real trick in today’s environment.

In Conclusion, consider the following chart comparing the S&P 500 in 2011 to this year (ending September 30, 2015). We began comparing these two years this summer when the noise over Greece triggered “déjà vu all over again” (RIP Yogi). With each day of pattern tracking the chart demands more attention. 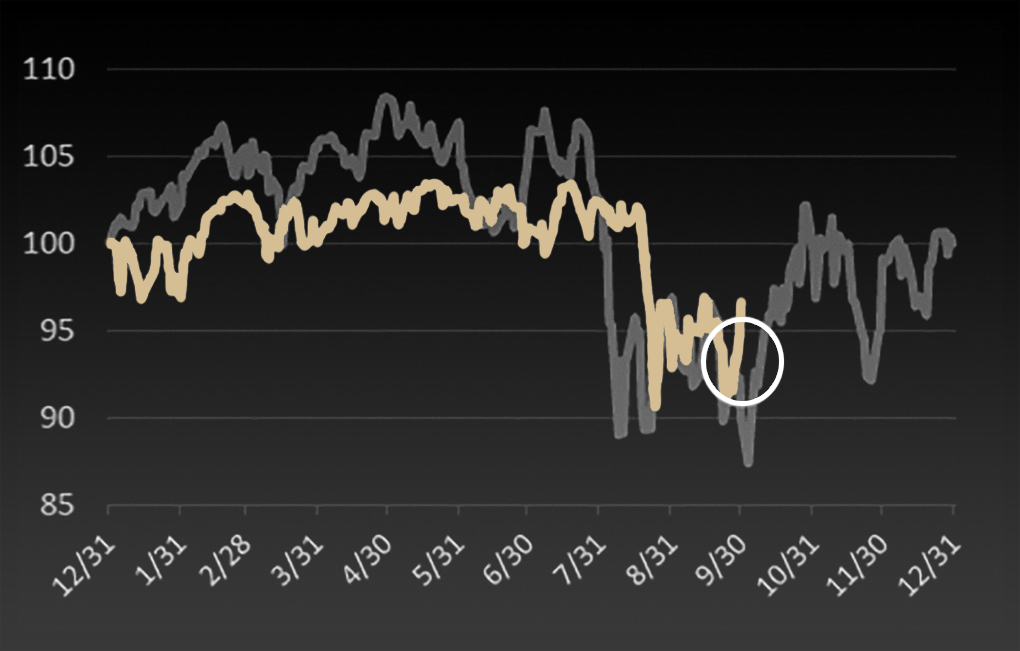 We do believe more volatility is in the cards this year. For the record, 2012 was a nice up year – and also an election year like 2016.

As a fiduciary for clients looking to us to manage their irreplaceable wealth, it is our goal to understand the facts, weed through the noise and make prudent decisions on where to place assets. Today, we like select US stocks, Europe and India.

Now, with one last tip of the hat to the great influence of music on our lives, we leave you with the title of a Neil Young anthem…

Keep on Rocking in the Free World.